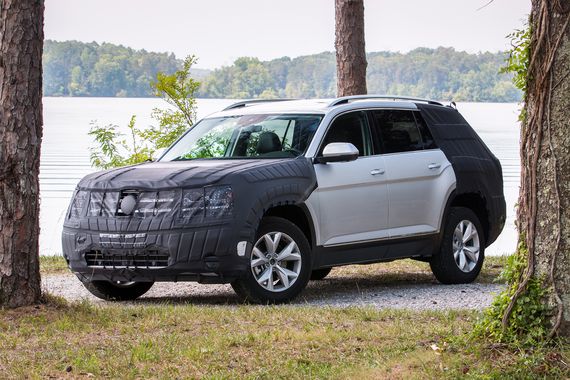 “You’re not allowed to take pictures of the interior. Not that you’d want to, because it’s mostly covered up.” It wasn’t a bluff — sliding into the passenger seat in Volkswagen’s latest ute, I was met with a whole bunch of carpeting covering everything from the dash topper to the gauges themselves. It wasn’t exactly fetching, but that’s what happens when you’re one of the first people outside the company to take a ride in a brand new vehicle.

Volkswagen’s been teasing a proper three-row crossover for years, and finally, we’re on the verge of getting it. It’ll do battle in the same Family-Friendly Thunderdome as the Honda Pilot, Toyota Highlander, Dodge Durango, Mazda CX-9 and Ford Explorer. It’s a crowded segment, but Volkswagen thinks it can give the group a decent smackdown when its three-row ute debuts at the Los Angeles Auto Show this fall.

And so do I. This segment isn’t exactly known for producing cars that are exciting to drive, save for the Durango R/T, which is wickedly entertaining with its Hemi V-8, and that’s more about outright power than handling prowess. VW’s SUV should come with I-4 and V-6 powertrains to start, with our prototype sporting the V-6. It provided more than ample thrust, with an exhaust note that erred on the angrier side.

What surprised me most about the car was its on-road demeanor. Like I said in my Volkswagen Golf 2-Door review, the chassis is firm, but thicker tire sidewalls soak up a decent amount of road nastiness. That’s much the same case here. The SUV doesn’t float, but it’s not jarringly firm. When our engineer-driver started taking some curves at surprising speeds, the ute was quite flat, and it never felt like it was being stretched beyond its capabilities, even though it was being driven in a manner that very few owners will likely emulate.

Sadly, I can’t give you much information when it comes to the general style of the thing. The car was rather heavily camouflaged front and rear, and the interior was covered in carpet. Hell, our engineer-driver didn’t even get to look at the gauges, thanks to that carpet covering the dash. Just like most American drivers, to be honest.

That said, having used my keen set of eagle eyes during a tour of the Chattanooga, Tennessee plant where this SUV will be built alongside the Passat, I can tell you that the final product will be rather handsome. Its look is reminiscent of the CrossBlue SUV from several years ago, albeit with a slightly bulkier stance and dimensions just a shade larger than the Touareg. There are strong character lines along the side, and the lights are on the rectangular side, like the next-generation Tiguan and the refreshed-for-2016 Passat.

As for the interior, that’s anybody’s guess. The whole dashboard was covered, save for a gearshift that looks the same as the one in my 2016 Golf SportWagen. Other touches, like window switches and door pulls, feel familiar, but it’s a kind of familiarity that breeds an immediate sense of comfort, rather than appearing like a blatant cost-cutting procedure, even though the pieces are likely used for the latter rather than the former.

I can tell you with certainty, however, that the leather is soft and the door-panel layout involves plenty of storage cubbies for passengers. There are two USB ports for second-row passengers, and that same second row is capable of moving forward so you can get into the third row while a forward-facing car seat is still bolted in. There’s also great forward visibility, thanks to surprisingly thin A-pillars.

My 6-foot frame was surprisingly comfy in the third row, with loads of headroom to spare. No matter the row, legroom and headroom were ample. The center console cubby was large enough for a purse, which probably makes VW’s German engineers very angry.

What puts those engineers in a tizzy, though, will only benefit us. This vehicle isn’t even going to Europe — it’s built for only two markets, the US and China. Three-row SUVs aren’t exactly hot topics in Europe, where gas has always been expensive and people aren’t forced into abstinence-only education. The US is all over that segment, though, and Volkswagen would be silly not to enter it.

We’ll find out exactly how well it resonates with customers in the fall, when it debuts in LA. Initial showings to dealers have been overwhelmingly positive, so there’s clearly a desire for a ute like this to exist. And Volkswagen has a chance to make its mark with a three-rower that’s both capable of hauling the family and delighting the driver once they drop the kids off at soccer practice and decide to take the long way home.